In 2014, we launched the Robert M. Dell Prize for Extraordinary Pro Bono Service, an annual recognition awarded to a Latham lawyer or team who has demonstrated an exceptional commitment to pro bono work.

This year we are thrilled to recognize the team of litigators who secured a major victory on behalf of the Spring Valley NAACP, Black and Latinx voters, and public school students in upstate New York.

The team’s lawsuit challenged the East Ramapo Central School District’s at-large method for school board elections under the federal Voting Rights Act. Following a multi-week trial in February and March 2020, the US District Judge issued an opinion in May that adopted all of Latham’s arguments, ruling entirely for the plaintiffs — a truly life-changing win. 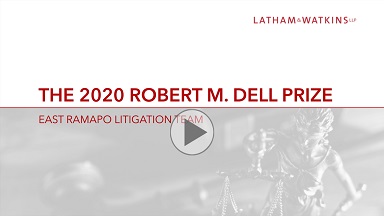 Press “play” to learn more about the case and Latham’s tremendous victory.